Communication between microservices allows us to build complex behaviours out of simple components. Most people tend to think of webservices when thinking of microservices however there are a number of other communication methods which are applicable in different situations.

What does a communication method need?

In order to use a specific communication method for talking between microservices the method must be versioned and have deployment independence.

The entire microservice (including any communication components) must be able to be deployed without orchestration with other services. Similarly the deployment of a consuming service must not necessitate a change from the provider. Or to think of it simply you must be able to deploy both provider and consumer without thinking of the other.

Different communication methods may have different characteristics which suit them to specific use cases.

With some communication methods we require that in order to use the medium itself clients must trust each other. For example you might allow external clients to call a webservice but probably not send messages on your message system.

Synchronous communication methods are generally request-response or call based. Synchronous methods work well for looking up some information or for performing actions which require immediate consistency.

Asynchronous communication methods are generally event based. Asynchronous methods work well for notifications about events which have occurred or for actions which can have eventual consistency.

The most common method of microservice communication is via HTTP webservices. This is probably because its familiar for developers using web stacks, and can be used both for services in you network as well as untrusted external access. HTTP is by nature synchronous (request-response). 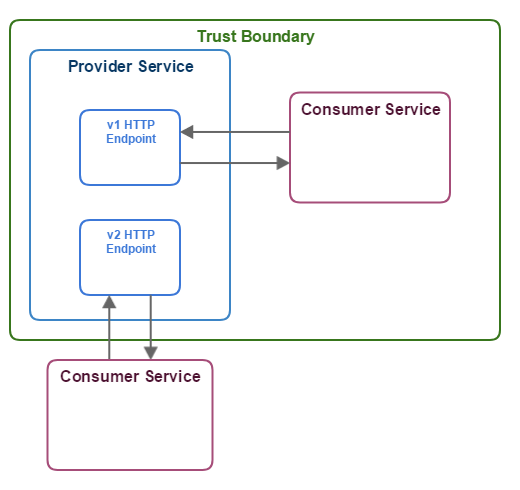 An HTTP communication method is implemented by the providing service creating an HTTP endpoint at a specific URL. Under this URL resources and methods exist which may be called by another service. The HTTP endpoint itself normally allows untrusted connections however security may be introduced by the service to enforce specific authorisations that may be relevant.

Ideally authentication should not be performed directly by the service, rather a signed token should be passed with the request which allows the service to perform any required authorisation checks.

Message passing is a common technique for asynchronous communication with microservices and generally occurs over a trusted medium (eg the messaging system). This involves publishing a message which another microservice can subscribe to, or sending a command to a microservice requesting an eventually consistent action.

Webhooks are an HTTP version of pub/sub message passing and are asynchronous by nature. While most messaging systems require all direct users of the system to be trusted, webhooks work well for pub/sub between endpoints which don’t implicitly trust each other (eg untrusted), for example between services maintained by different organisations. 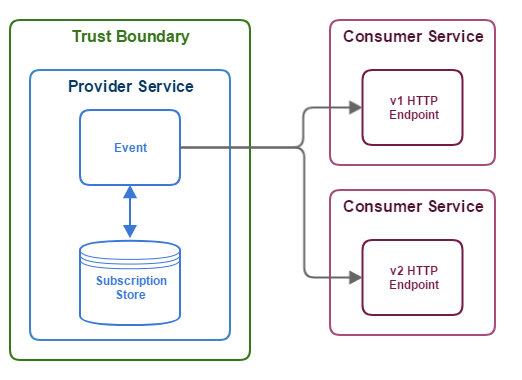 Runtime plugins can be used as a communication method with microservices under certain situations. I think most developers wouldn’t even consider runtime plugins in microservice environments as most runtime techniques introduce significant coupling. However with a little cleverness this can be avoided. Runtime plugins are generally synchronous and always trusted as they require injecting code into the consumers running process.

In order to gain deployment independence we need to ensure two things, firstly that the plugin can be upgraded at runtime based on an external deployment, and secondly that the upgrade will happen in a predictable time window. In order to achieve this we must make the plugin actively watch a repository and in-place upgrade itself when a change occurs. If the repository cannot be contacted within the deployment window the plugin should stop functioning in order to provide a guarantee that a deployment has successfully completed after that window expires.

In the .NET world runtime plugins can be built using AppDomains and a shared folder (as one example).

When to use runtime plugins

Runtime plugins solve a very specific microservice problem. They should generally be approached with caution and only used when other options are inappropriate.

Scenarios where runtime plugins are appropriate

How to pick a communication method

Selecting a communication method is about working out the characteristics your consumers will require and selecting a method which will satisfy those. For example if you need to provide data on request (synchronous) to clients which are not part of your organisation (untrusted) then you should use HTTP requests as a method.